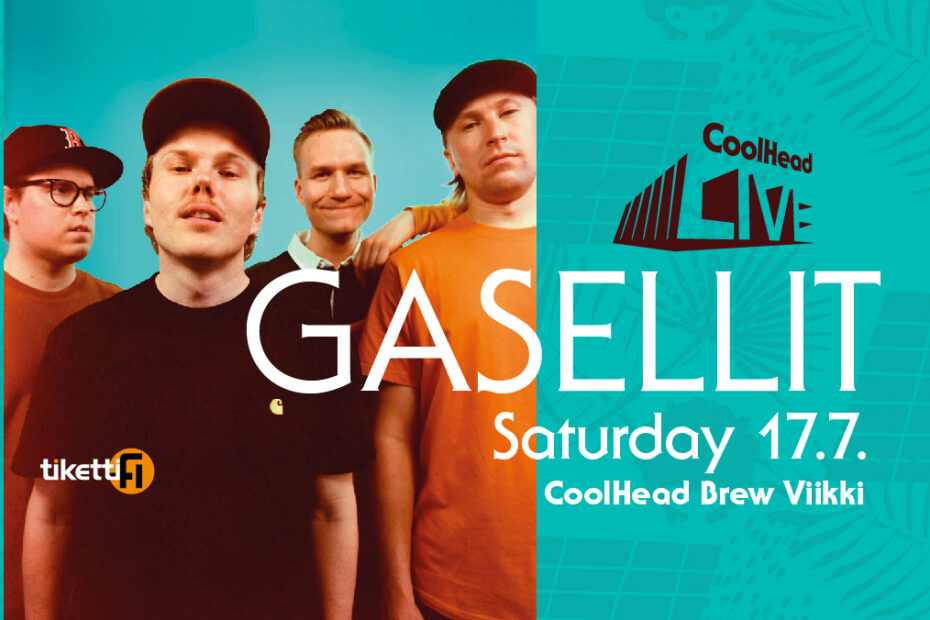 Tickets now on sale at www.tiketti.fi/coolheadlive

Been craving for gigs and festivals to return? We at CoolHead have and that’s why we are very excited to announce that we are opening a huge festival area in front of our new premises at CoolHead Brew Viikki in July. The area will host both Craft Beer Garden Festival (9 to 10 July) as well as a series of concerts.

The first concert to be released is a mega concert by our favorite Finnish hip hop group GASELLIT! The gig is their first one in Helsinki this year so a spectacle is guaranteed!

Tickets are on sale from Tiketti for a price of 30€. We take into account all event restrictions and regulations with a priority on safety. There’s a limited amount of tickets on sale. The age limit for the concert is 18.

PS. Naturally we will have a wide selection of CoolHead Brew beers available – including the latest batch of the CoolHead x Gasellit collab beer Zen out of Ten 5%!

The concert is produced by Master Events in collaboration with CoolHead Brew. We will be releasing the rest of the July concerts during the first weeks of June.

This website uses cookies to improve your experience while you navigate through the website. Out of these, the cookies that are categorized as necessary are stored on your browser as they are essential for the working of basic functionalities of the website. We also use third-party cookies that help us analyze and understand how you use this website. These cookies will be stored in your browser only with your consent. You also have the option to opt-out of these cookies. But opting out of some of these cookies may affect your browsing experience.
Necessary Always Enabled
Necessary cookies are absolutely essential for the website to function properly. This category only includes cookies that ensures basic functionalities and security features of the website. These cookies do not store any personal information.
Non-necessary
Any cookies that may not be particularly necessary for the website to function and is used specifically to collect user personal data via analytics, ads, other embedded contents are termed as non-necessary cookies. It is mandatory to procure user consent prior to running these cookies on your website.
SAVE & ACCEPT